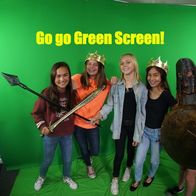 Now, we've talked about the evolution of the Greek alphabet which borrowed from Phoenician characters and the English language borrowing from the Greeks.  Around 800 B.C., a blind poet named Homer came up with 2 epic poems that drastically changed literature forever.  The Iliad and Odyssey are still considered to be some of the greatest and oldest stories ever told and then later written down.  Indeed, the Iliad's tales of Achilles heroic actions in the Trojan War and the Odyssey's portrayal of a smooth talking schemer named Odysseus have kept audiences entertained for thousands of years now!!!!!!

Our textbook also reminds us about Aesop's contribution to Greek Literature:   the fables he wrote, such as the Tortoise and the Hare.